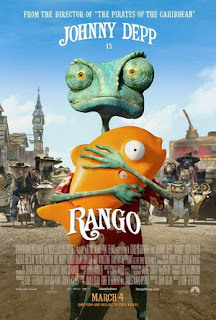 “Helmer Gore Verbinksi (“Pirates of the Caribbean”) directs this family-oriented animated adventure starring the voice of Johnny Depp as a family pet who leaves the comfort of home to explore the outside world. John Logan (“The Aviator”) provides the script for the Paramount Pictures production. Abigail Breslin, Isla Fisher, Alfred Molina, Ray Winstone, Harry Dean Stanton and Ned Beatty provide the voices for the rest of the cast.” -Cinema Online

Verdict: I don’t think kids would get the jokes but it wouldn’t really be that amusing for adults either. It started out alright but it gets extremely cliche and predictable, as though they ran out of creativity halfway through the production. It was disappointing for me, personally, because after watching the teaser/trailer, I thought it was going to turn out to be something really different, especially with Johnny Depp involved. And also, I don’t see the point of having animals, reptiles or insects as the characters when they’re gonna act like humans anyway. I would’ve prefered it if they related it more to how they naturally are, just like how ‘Finding Nemo’ did it.

The Spirit of the West: It’s obviously Clint Eastwood, the icon of classic western films. I knew right away when I saw the Oscar awards at the back of his vehicle.

Date for the show: Christy Hii

Her verdict: “Quite funny but too deep for kids to understand. The storyline is so random, it’s like they started making the movie without even completing the script first.”