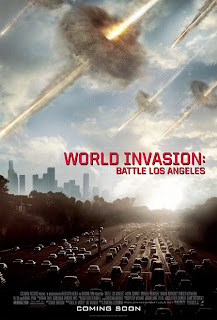 Synopsis: For years, there have been documented cases of UFO sightings around the world – Buenos Aires, Seoul, France, Germany, China. But in 2011, what were once just sightings will become a terrifying reality when Earth is attacked by unknown forces. As people everywhere watch the world’s great cities fall, Los Angeles becomes the last stand for mankind in a battle no one expected. It’s up to a Marine staff sergeant (Aaron Eckhart) and his new platoon to draw a line in the sand as they take on an enemy unlike any they’ve ever encountered before.

Verdict: I don’t mean to sound like Simon Cowell, or any British for that matter, but this film is just absolute rubbish. If you thought ‘Independence Day’ and ‘War of the Worlds’ were bad, this one is way worse. It’s cliche, unoriginal, the dialogues are cheesy and the shaky camera effect is overdone. The only thing that kept me interested was the design of the aliens, aircrafts and machineries. I personally think the best recent extraterrestrial-related movie is still District 9.

Alien incompetency: (SPOILER BEGINS HERE) Firstly, the aliens’ laserguns seem a little weak as hitting the target would only give them a patch of third degree burn. Secondly, one of the aliens actually had a clear backstab shot at Lehiman and it didn’t manage to kill him. Then at the final battle scene, how is it possible for 7 soldiers to hold off the entire army of aliens at their command centre? This should only happen in video games! Furthermore, why the heck did the command centre-cum-mothership float off from the ground anyway? For the humans to have a clearer shot? They don’t even have force fields as shield. Guess the technology of the aliens here aren’t as advanced as the ones in the other alien films (SPOILER ENDS HERE).

Favourite quote: -Santos: “The nasty stuff’s all over my face.” -Harris: “Don’t you let them do that on your first dates?”

Funniest comment on the film: “i love this movie…but its funny how all the black people﻿ survive.” -FallGameProductions

Date for the show: Christy Hii 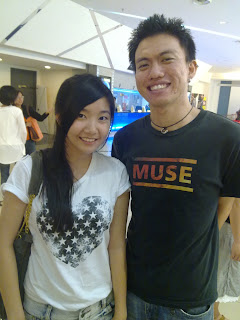 Her verdict: “I liked the beginning part of the film although the shaky picture gave me a headache. I tend to talk a lot during a movie if it’s not entertaining (and that’s exactly what we did).”