Inspired by a superhero team of the same name in Marvel Comics, Big Hero 6 is about how a boy becomes a superhero after the death of a family member… yes, pretty much like the origin story Batman, Spider-Man and maybe countless others. His name is Hiro (but of course) and with Baymax (a personal healthcare robot created by his brother) along with a few science nerds he “upgrades” with super high tech suits, they go after the man with the kabuki mask, who stole his technology and is responsible for the death of his brother.

Directors Don Hall (Winnie the Pooh) and Chris Williams (Bolt) sure know how to bring serious fun and laughters in this animation-superhero crossover. Just imagine getting elements of the cool superhero action from The Avengers, the adorable process between a boy and his new found non-human companion like in How to Train Your Dragon, and funny support characters like Olaf from Frozen, all together in one Disney animation. No doubt it’s undeniably entertaining. Although the target audience is obvious, the jokes and humour are equally hilarious to adults.

The characters are very well designed although Hiro Himada looks like a typical protagonist that came right out of a Japanese manga, anime or RPG game. Baymax, the big rounded inflatable robot, does not disappoint. It’s cute, it’s funny, it can kick ass without hurting anyone and it’s medically educational for kids as well. It totally stole the show just as the trailers suggest (thank goodness the fat cat has limited screen time). Hiro and Baymax are voiced by Ryan Potter (Supah Ninjas) and Scott Adsit (Mary Shelley’s Frankenhole, Moral Orel) respectively, who did their job just right along with the rest of the cast.

The story is set in the fictional city called San Fransokyo, an obvious combination of San Francisco and Tokyo with Japanese/Chinese characters around but the citizens all speak English. In this universe, only these few kids have the technology and intelligence to build all these cool gadgets and suits from a 3D printer-like machine and apparently nobody else can or want to. Why? Who cares, leave your brains at the door and just enjoy the ride. The CG visuals are nothing too spectacular but they’re colourful and competent for a Disney featured film. The very limited action sequences are very fun to watch as well for a parody animation.

However, if you’ve seen enough movies or read enough mangas, it may feel that the entire film is too formulaic and thoroughly predictable. And I really do mean thoroughly. It was obvious who the antagonist was going to be from the moment he’s introduced and the ending is so cliched it made me wonder if all these were deliberate for purpose of paying homage to comics and superheroes. There’s no shortage of cliched moments and it’s literally no real surprise in the plot. The cool high tech gadgets, suits and the support characters (each with their own style and weapon) are cool, but unfortunately the film doesn’t show enough of all that, as though it’s just a small commercial to attract kids to buy the toys and play them themselves. Even during the tech exhibition scene, it goes straight to Hiro’s presentation instead of having fun with the other inventions first. Seems as though Disney’s being stingy with their creativity.

The character development is poor as well, sidelining most of all of Hiro’s friends on the team and neglecting to tell more about the villain. The scenes of Hiro’s brother Tadashi (Daniel Henney) and the ending are effectively touching indeed, but we could see these scenes coming from miles way. Typical movie cheats for an emotional climax via shortcut. It also fails to really develop the relationship between Hiro and Baymax. As soon as Baymax is activated after Hiro’s brother dies, they practically go straight to seeking the villain. They aren’t much bonding or impactful dialogues between them to make me feel that there is a genuine friendship there. Unlike in Terminator 2: Judgement Day, it still hits me at the end where the robot Arnold lowers himself into the burning metal after saying sorry to the kid. The music score by Henry Jackman is not that impactful to me either.

In a nutshell, Big Hero 6 is an entertaining tribute to Marvel and superheroes in general, but coming from Disney, I was expecting much more from them. Funny thing is that I felt that even some Marvel films and cartoons seem to have more heart and soul than this. Where’s the magic again, Disney? 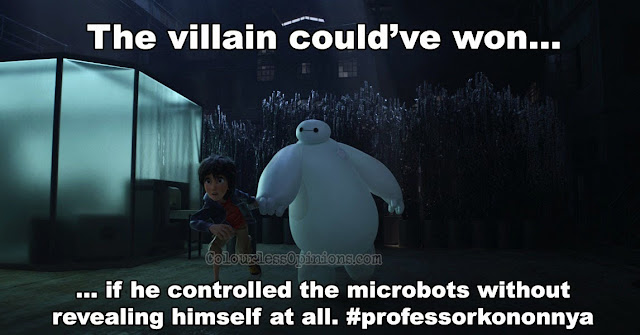 Post-credit scene: Like all Marvel films, there’s one here too. It’s not a sequel-related scene or even that funny at all, but super hardcore Marvel fans would want to see this. I’m not gonna say what it is, I wouldn’t want to ruin the surprise.

What I would’ve named the film: “Disney’s Tony Stark & His Avengers”

Censorship in Malaysia: It’s a kids animation, so chill, our beloved local film censorship board isn’t that extreme (yet).

To watch in 3D? I don’t think it’d have much of a difference if you’re an adult. But I can’t say for sure as I only watched it in standard format.

Second opinion: My girlfriend felt the same way, predictable but super cute and fun to watch. 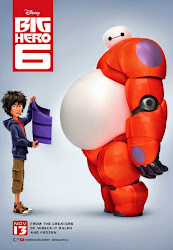 Based on: “Big Hero 6” from Marvel Comics