Synopsis: “A small town located in Klang, a rogue named Te Sai unknowingly stole a ring during a memorial ceremony of a group of gangster. The ring hosts three ghosts (the former gangster leaders) and the three ghosts haunt Te Sai. Te Sai soon finds out that the three gangster leaders were killed by a traitor (Ewan) with his personal agenda that will threatened the decades of unity between three groups. With the guidance from three ghosts, Te Sai must do what he cans to unify the gang and avoid a tragedy that may result in deaths of many innocent people” (Ram Entertainment).

Verdict: They had three times more budget than their previous production but failed to deliver a good film this time. Hantu Gangster is basically Stephen Chow’s CJ7 (2008) with so-called gangsters and ghosts instead of the alien. The movie is extremely poor compared to Nasi Lemak 2.0 (2011). The moral purpose is very clear – racial unity, but not only that the meaningful message is not implied properly, it’s also awfully wrong to try to convince viewers that the existence of gangsters was actually for the good of Malaysians. The humour is very predictable and there are many awkwardly off-flow scenes as well. The only thing that I personally admired was the acting performance of most of the main cast.


Second opinion: “Lame; it tries very hard but it just doesn’t make any sense; there are some really good acting though” (Iris Loong).

Post-credit scene: There is one but not worth waiting for.

Funniest scene: A random fat guy playing football enthusiastically by the harbour, ignoring the two main characters in the scene. This is the only part where I laughed. Artistic humour.

Lamest scenes: Ewan (Farid Kamil), the antagonist, starts a very long dance in an Ultraman-like costume after killing the three bosses and during the post-credit scene.

Most repeated words: “Kuihkochi” and “Christopher”. No more “Walao Eh” this time.

Imbalance racist gag: The Malay carries a keris, the Chinese carries two parangs and the Indian carries a bottle of beer. And this movie is supposed to be about racial harmony?

The only convincing message in the movie: The police are useless, that’s why gangsters are needed.

Special thanks to Fred Chong, the executive producer of Hantu Gangster, for inviting me to the Red Carpet Gala Premiere. 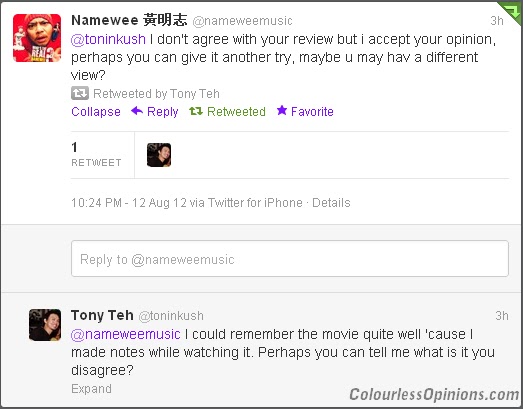